It is not without some knowledge of the history of medicine in America that I assert that the next generation of physicians, my generation, has a momentous opportunity to be an integral part of a great change within medicine and our society. Our forefathers have done great things. The physicians around the turn of the 20th century were amazing innovators and great spiritual leaders, guiding our practice into a new age characterized by new partnerships and reaffirmed core principles. The great physicians in the middle of this past century were the great minds, catapulting medicine ahead with new scientific advancement and rigor, new treatments and for the first time, the promise of cures. If we can remember, we stand in awe of our history, and indeed, our leaders today would have us believe with every sinew of our impressionable hearts that for all of our future accomplishments, we stand on the shoulders of giants. 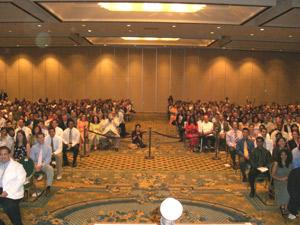 Photograph of a White Coat Ceremony courtesy of Phil Chou, a physician-in-training

And yet, I suspect that we are too quick to self-congratulate, to be complacent while basking in the glow of our glorious past. It is not uncommon to encounter a medical school professor pontificating about the age of discovery like an art historian lovingly serenading The School of Athens, or a physician reminiscing about the good old days, when we were like knights in shining armor riding in amidst cheers and adoration, or ship captains free to roam an uncharted ocean and do as one pleases. This is not to say that we shouldn’t have our heroes and our inspirations. However, I wonder if our predecessors spend more time enthralled with nostalgia than concerned with the troubles of our own time – or the fate of medicine in our future.

Did those legendary heroes of medicine spend their days longing for past comforts? Did they hold so tightly to their territories, viewing any change as an immediate threat to the sake of the profession? I think not. They were agents of change – reformers, idealists, dreamers. They thought outside of the box to solve the problems of their times and move toward a vision of a better future. What convinced William Osler to believe that medical students should learn directly from interactions with patients rather than from the traditional library or lecture hall? Without the widespread fear in Americans of the silent, insidious spread of the debilitating disease polio, would Jonas Salk have felt compelled to pursue a vaccine? Without equality and equal opportunity as core principles in her heart, would Elizabeth Blackwell have tolerated the jeers and prejudices of her classmates and instructors on her road to becoming the first female physician in America? Each of these physicians identified a great problem, and with resolve and inner strength, they fought hard and brought about change. Once they knew which direction to go, they looked forward; they did not turn back.

As much as I have respect and admiration for my teachers, I now realize at this stage in my training something I only suspected before: the defeatist and disenchanted attitude among many young and old physicians is a result of the sins of our fathers, the mess left behind by our mentors. Many of them have fought hard to bring about positive change, but the backdrop of conservation and damage control has stifled their efforts. However, many of them seem to believe (and subsequently preach in subtext) that nothing can be done: that medicine, as a profession, is sliding into a terrible abyss. That medicine is no longer ours, that the encroachment of our would-be friends and allies will destroy the quality, and our ownership, of medicine. That the baseness of litigation has tainted the honorable and benevolent intentions of medical practice. That the more medicine becomes a business, the more readily our souls are corrupted and deprived of the grace of compassion. That today’s young physicians, despite their energy and hope, stand no chance against the winds of change.

I will not be defeated. The medical field, like many, loves to adore its own and create a culture of elder idolatry. In worshiping the past, many physicians are blind to the world around us:

They believe that medicine is a treasure to be preserved and reserved for a few. I believe that medicine belongs to everyone, because it is for others that we devote ourselves to this profession. In protecting the integrity of our profession, we must not deny our calling, even if that calling changes and grows. Many physicians look to the Hippocratic Oath as though they can only abide by its words, and anything left out is not part of our duty or purpose. I believe that as physicians it is our mission to treat disease and ease the suffering of all people to the best of our ability. We many not all choose to save ten million lives in a developing country. But, despite the excellence and equality of our medicine, we must all choose to do our best to fight discrimination and inequality in health care, whether along the lines of race, creed, or wealth.

They believe that lasting respect and admiration is won through intellectual achievement in the realm of basic science research – the fundamental knowledge of disease etiology. I believe that rewards and commendations come from one’s peers, and it is my belief that my peers and my more recent forebears seek different ideals from our mentors and teachers. Perhaps I am premature in saying so, but I suspect that the age of discovery is gradually coming to an end: there is much we know about disease and its causes, and we have developed vast amounts of therapies and treatments to stop disease in its tracks, save lives from sudden conclusions, and even reverse the course of some diseases. Research into these realms will not doubt continue, but I wonder if there will be new emphases and movements. We have our own callings, and we will commend one another based on what we hold to be valuable in our hearts and minds, not necessarily criteria that is inherited but anachronistic.

What are the callings of my generation? We want to heal the world – one world, one people, united, if nothing else, by the part of human nature that makes us care about a stranger in need. The eloquent writer-surgeon Atul Gawande has suggested a focus on delivery over discovery, the need for greater resources put toward getting health care to people who need it rather than on researching obscure diseases and minutiae. The physician-on-a-mission Paul Farmer proved to the world that it is possible to treat AIDS in a resource-poor setting like rural Haiti. The world, growing ever smaller, brings us closer together and makes us more aware of our commonality and the potential for mutual benefit through benevolence.

We want not only to treat disease: we want to stop disease before it ever begins. Preventive medicine is the catch word championed by primary care and family physicians, often among the least respected and influential in the medical profession. However, the wave is coming, and a large emphasis within the greater political movement toward universal health care is on preventing the development of disease. The only thing keeping us from wholeheartedly pursuing this mission is the taught cynicism and distrust in others handed down to us by our mentors: that people will not change, that people will not be able to make good decisions for themselves despite our attempts to educate them.

And lastly, we want more than that which was given to our forebears: we want respect, we want good lifestyles, and we want a better situation than the regrettable status quo that is so desparately protected by those that came before us. No change is one-sided, and it can be said that those that walked this path before us have ruined it for us. But that is not how those of us who have recently chosen medicine as our path see it. We want things to be different, because the way things are now is inadequate, inappropriate, and undesirable. We want change, and so does the society and world around us. Not all change is bad, and while it may be prudent to be careful and wary of change, it does no one any good to be blind to our callings.

The callings of my mentors and teachers may be quite different from my own and that of my colleagues. If that is so, then I tremor at the thought of a great change coming, a great awakening of our society to the centrality of health as a foundation of our lives and the immediate potential for the medical profession to lead that change. My generation will be part of a great movement, or if nothing else, we will not cower in fear of change. That change may not require that we all fly under the AMSA banner or preach to the choir about benevolence and mercy. But it will require that we, unlike our predecessors, reach out to our communities and regain the trust and respect that our forebears squandered. It will require that we speak openly, truthfully, and clearly to the questions and needs of our society. It will require that we learn to trust our patients as much as we ask them to trust us. It will require that we reassess our underlying assumptions and turn away from the blindness of arrogance in order to learn from our own mistakes and find strength in a calling reinforced by our honesty with ourselves. In doing so might we bring about the change we seek. All this and more, if we are not defeated by a lack of self-confidence or self-realization. I will not be defeated.

“I want to throw open the windows and get out of this narrow medical atmosphere in which the enormous healthful influences of the outside world are so largely disregarded.” – Richard Clarke Cabot, M.D.

Medicine on the Web